As a family-owned publishing house, sometimes we have the privilege of producing a book that means a lot to us on a personal level. So, it gives me great pleasure to show off my son’s very first published book! NL Snowmageddon 2020 by Nick Cranford was an incredibly fun project to put together in the days and weeks following that snowstorm and the accompanying state of emergency in St. John’s. But let me backtrack a bit.

On the first night of the storm that media dubbed “Snowmageddon,” Nick had the foresight to create a Facebook group whose purpose was to connect people during this weather event . . . people who might need help from others shovelling snow, delivering food or medications, administering medical aid, or simply talking to each other to help curb the loneliness that comes from isolation and being snowed in. The storm began on Friday night, and by Monday it had grown in membership to over 100,000 people! This made Nick something of a local celebrity. During the eight-day state of emergency that followed, he was interviewed (via phone) by media from all over.

Then, someone in his Facebook group suggested that he publish a book of the photos people were posting there. And that’s exactly what happened. In the days that followed, Nick and I reached out to contributors to obtain permission to use their photos in the book . . . and once again, in true Newfoundland fashion, members of the Facebook group showed a true sense of community, pride of place, and esprit de corps by helping us commemorate this event in book form. It’s a time I’ll never forget, and I’ll always be proud of my son for the service he provided for thousands of people who found themselves snowed in. 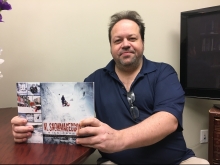